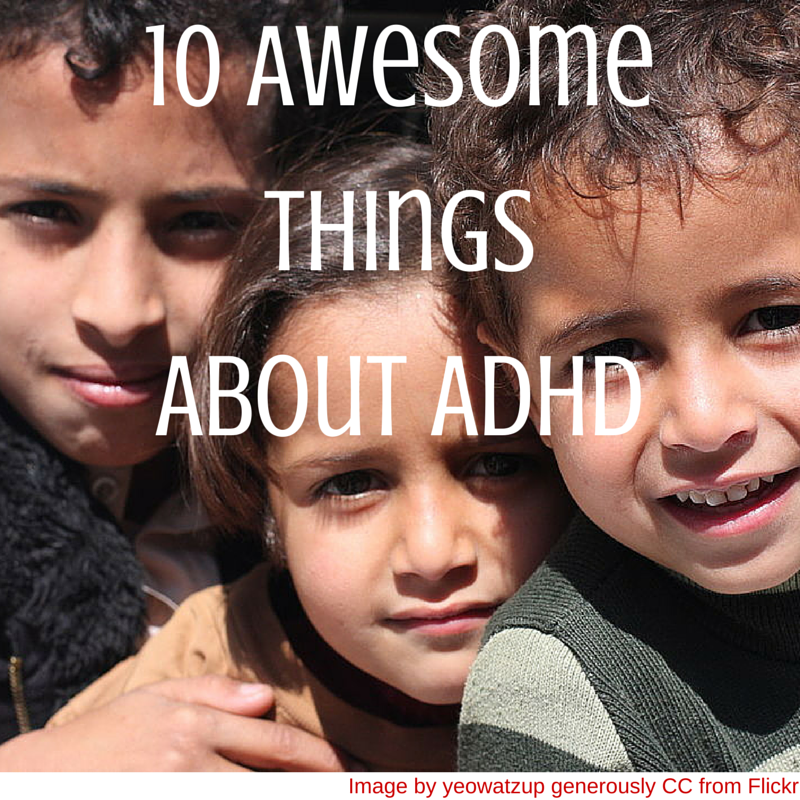 Too often, kids with ADHD hear things like, “Slow down!” “Relax!” “Take it easy!” “Concentrate more!” and the like.  Of course, we as parents are only trying to help our kids, but it’s really easy to lose the long view of life when all you want is for your kid to do his cursed homework and stop running around the house like a tornado.  In that vein, I’ve got 10 awesome things about ADHD for you that you should tell your child about!  Don’t keep them to yourself.  As Ned Hallowell says, ADHD is like having a Ferrari brain with bicycle brakes.  All it takes is a good brakes specialist to get your child on track.  ADHD isn’t something to fear and it’s not something to be ashamed of.  It simply is. (See how zen I’m getting?)

Kids with ADHD grow to become real go-getters, more often than not.  You know how your kid makes you crazy because after continuously telling him to stop doing something, he keeps on doing it… Again and again and again?  This trait could come in as really helpful when he’s an adult.  He’s going to just keep trying to get into that prestigious school, for that promotion or to get his business up and running.  Nothing is going to slow him down!

Isn’t that a gift?

ADHDers are unrestrained by the boundaries us neurotypical folks give ourselves!  They throw out the rule books and forge their own way.  Forgetting the two paths ahead of them in the woods, they will climb the trees all about them and figure out the best way to go from up there.

ADHD folks are innovative!  Here is a short list of people diagnosed with ADHD or who were suspected to have ADHD because of their rebellious youth, below average performance in school, a tendency to switch pursuits many times and a tendency to hyper-focus.

People with ADHD simply have different wiring in their heads.  They can often create masterpieces from utter chaos, leaving us in the dust, marveling about their abilities.  Creativity doesn’t only apply to the creative arts, either (though it often does!) but also to writing, the sciences, and problem-solving.

There is something special about the ADHD population.  Because of all of their special traits, we are all drawn to them like like magnets.  They become the CEOs, the head honchos, the people we need to talk to to get the stuff we need and want.

When someone with ADHD is on a mission that he loves and enjoys, there is really no stopping him.  This population have such a passion for learning and doing that us, as parents, often feel silly for spending their whole childhood worrying.  They perhaps.. Don’t learn in quite the same way as others.

Some people can be so willy-nilly, constantly speculating and being wishy-washy.  But kids with ADHD tend to see a problem and come up with a solution – snap!  Not all the time, of course, and not everyone with ADHD is like this, but so many are!

Folks with ADHD just think differently.  And this is a good thing!  Just review the list of entrepreneurs up above to remind yourself.  Doing things in the same old way all the time just doesn’t lead to progress.

A very simple conversation, a very simple request.  When you walk back into the kitchen 20 minutes later to find flies around the congealing food that’s still on the table and your son is still incredibly involved in the book he’s reading or the Legos he’s playing with or the story he’s writing or the…

Yes, this can make a parent crazy, especially if you have to ask several more times, armed with the knowledge that you could have done it your own darn self a thousand years ago.

But parents!  This is how masterpieces get painted, how best-sellers get written, how things get done!  He really doesn’t mean to not do what you ask, he really just doesn’t realize how much time has passed.

Turn these annoyances into the blessings that they can become.  Just do your best to encourage your child to become the best he can be.  Don’t nag about weaknesses!