The Damaging Impact of Infections on Children’s Behavior

When children are rude, aggressive, or even violent, they are often pigeonholed as hostile rebels. Lots of them are diagnosed with ADHD or ODD (Oppositional Defiance Disorder) and put on medication from a very young age. But aggression in kids can sometimes be traced to an infection raging in their bodies. Violent behavior and aggression in kids and teenagers may be triggered by numerous factors such as:

Occasional tantrums are normal, but when a child has such defiant behavior that school performance and social interactions are deeply affected, a thorough investigation is needed. This is not to say that ADHD does not exist or that all children with these disorders are aggressive and violent.

Doctors and medical researchers have recently found that certain bacteria cause reactions that can be easily misinterpreted as ADHD symptoms. As a consequence, the children do not receive the correct treatment and their behavioral problems may worsen over time.

Ear Infections and the Restless Child

More than three decades ago, medical researchers established a connection between ear infections and ADHD. Later studies, as the one carried out by Hagerman R.J. and Falkenstein A.R., brought additional evidence to support the theory that recurrent otitis may lead to hyperactive behavior. The two scientists observed 67 children (aged 6 to 13 years old) out of whom 27 displayed ADHD symptoms. The later had suffered from otitis at least three times in their infancy. The rate of year infections among the other 40 subjects was much lower.

Adesman A.R. and his team conducted a study on 138 children to investigate the link between ADHD, learning disabilities, and otitis media. Out of the total number of participants, 45 were diagnosed with learning disabilities without ADHD and 21 with ADHD but without learning disabilities. The researchers interviewed the parents and discovered no significant difference in the number of ear infections experienced by children in both groups. They noticed something else: hyperactive children had suffered from otitis more recently than the others. Thus, Adesman suggested that hyperactivity resulting from middle ear infection may not be a permanent condition.

Doctor Jean Hebert and his colleagues from Albert Einstein College Medicine in New York were highly intrigued by some laboratory mice which were running ceaselessly around their tails. Some tests were performed and all restless mice turned out to be deaf. They continued their observations and reached the conclusion that ear dysfunctions may affect the brain, triggering hyperactivity.

Candida, scientifically known as Candida Albicans, is found in small amounts on the skin, in the mouth, in the digestive tract, and in the vagina. When the immune system is wakened the candida fungi multiply excessively with serious impact on health and unexpected behavioral issues.

When this fungus causes yeast infection and spreads toxicity in the body, it may cause:

As a result, numerous children are diagnosed with ADHD when the real problem is in their gut. Bacteria and yeast usually coexist in the intestinal tract. If this balance is disrupted, major health problems occur. For example, the prolonged and excessive use of antibiotics destroys the intestinal flora. Bacteria die but the yeast survives and even overgrows. Sugar is another “good friend” of yeast. Therefore, a balanced diet void of sugary products prevents the further development of yeast while the level of hyperactivity, anger, and irritability decrease.

Julia J. Rucklidge, professor of psychology at the University of Canterbury, New Zeeland, carried on a study on yeast infections and effective treatment of depression and ADHD. The researcher followed one case systematically for a period of three years and observed that the symptoms worsen when the Candida infection was present. Her work pointed out the importance of a healthy gut in alleviating behavioral disorders with micronutrients.

Candida infection can be detected through throat swab tests, IGg blood tests or urine tests. If the results are positive, an anti-yeast diet has to be followed. It is quite challenging to impose culinary limitations on a child that it is already tense and suffering from itches, abdominal pain and bloating. However, the results are visible and both parents and doctors have reported significant behavior improvement.

Tips for a Diet to Fight Candida

When symptoms enter the remission stage, certain food has to be reintroduced gradually. This does not mean returning to the old eating habits since they were the initial cause of the toxic yeast infection. 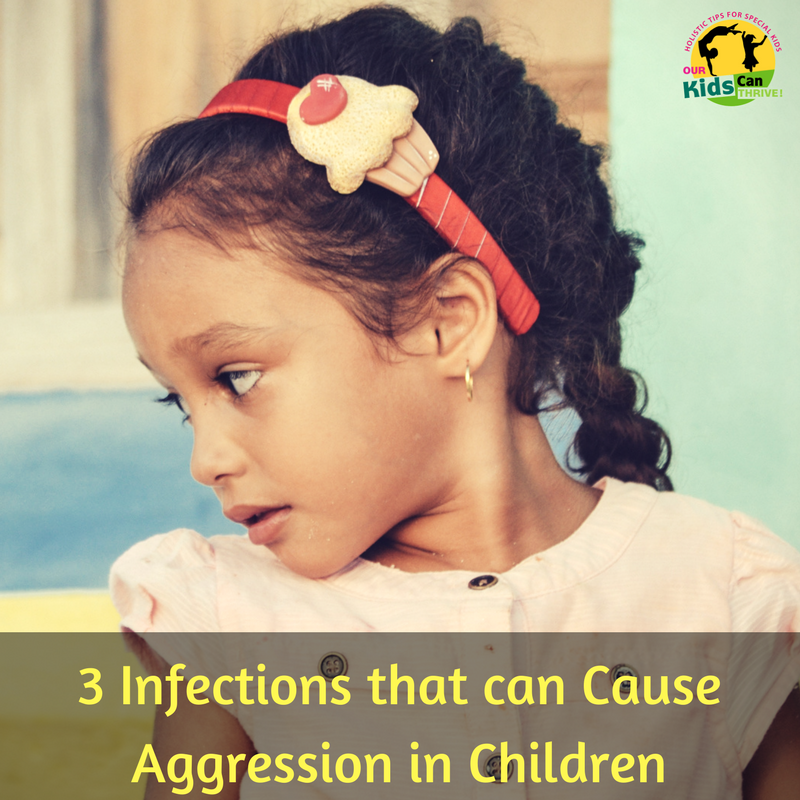 PANDAS and PANS Infections and Aggression in Kids

Although difficult to believe, a common strep infection may have a dramatical impact on a child’s brain. Nice, friendly, and easy-going children can turn almost overnight into aggressive, restless, and compulsive ones. This sudden, out of the blue change might be the result of PANDAS or PANS.

Doctors explain that the Pediatric Autoimmune Neuropsychiatric Disorders Associated with Streptococcal Infections occur when the antibodies fighting against streptococci, also attack body tissues which present structure similarities with the invasive agent. The antibodies damage the part of the brain that commands both behavior and body movements.

In 2000, a group of medical researchers from Yale School of Medicine was conducting a study on OCD, Tourette Syndrome, and strep infections. To their surprise, they discovered that subjects with ADHD had more strep antibodies than the other participants. This pointed towards a recent infection. The scientists considered that using antibiotics as a preventive measure was by no means advisable.

Since PANDAS and PANS are only now becoming more common, children suffering because of them often receive medication and therapy for OCD or ADHD. The real causes of obsessions, tics, and irritability are not addressed and therefore the child’s symptoms aggravate. Doctors specialized in the disorder claim that when given immunological treatment, children affected by PANDAS feel much better.

It is very difficult to get a correct diagnosis in the case of these disorders. There are blood tests to identify the presence of strep antibodies. However, this alone does not mean that a child’s uncontrollable behavior is the outcome of an infection. Studies still need to be performed in order to identify the factors which make some children prone to PANDAS.

Signs and symptoms usually associated with PANDAS and PANS include:

Most PANDAS and PANS cases are treated with psychiatric medication, antibiotics, nutrient supplements, and anti-inflammatory therapy. For severe cases, it is sometimes recommended the intravenous immunoglobulin therapy.

Children need their health to have a harmonious intellectual and physical development. A minor cold or a common infection should be given proper attention because they do have an impact on their body. This does not mean to hide children in an antiseptic bubble, but to seek adequate and professional help to prevent and cure body imbalances.

Adesman A.R. and his team

Other Sources for Ear Infections and Aggressive Behavior

Other sources for Candia and Aggressive Behavior