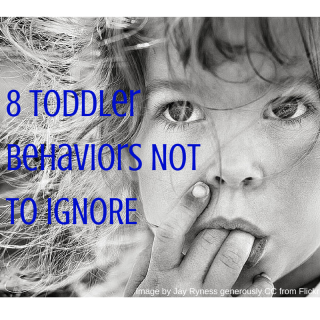 Most toddlers are often go, go, go and they are changing all the time, doing new feats and learning new skills.  There are some behaviors you may be tempted to ignore, but really shouldn’t.  Here are 8 behaviors not to ignore in your baby, toddler or older child.

Keep an eye out  if your toddler does these things especially if she has a special need because they can become intensified the older she gets, potentially causing problems.

8 Toddler Behaviors Not to Ignore

Toddlers don’t always have bad intentions when they play rough but when it comes to behaviors like biting, shoving, punching and pinching, it’s just not ok to let this stuff go. Behavior that is simply too aggressive can become a big problem later on.  Teach your child age appropriate empathy, explaining that these things cause pain and that she wouldn’t like it if someone did them to her.

Pretending Not to Hear You

This one can turn into problems for a whole lot of reasons.  It’s  disrespectful, it’s a form of lying, and it can lead to you losing it and screaming your head off (if you’re like me, which I’m sure you’re not..) so if you see that this is a problem, try walking over to your child, touching her shoulder and making eye contact when you talk to her.  Make up a logical consequence if you need to ask for something more than once.

Pointing Toes and Walking on Tiptoes

You might just think that this is a normal type of play for a baby or toddler but if you see her doing this often, keep a watch out for other symptoms of autism.  Talk to your doctor for more details. 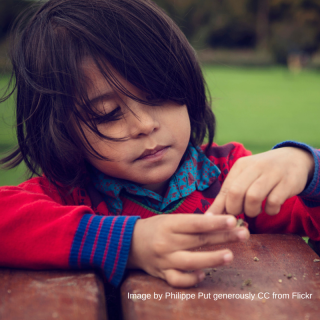 Until they is around three or four, toddlers  don’t really realize that they are lying.  They just don’t really have a clear concept of fantasy and reality.  If you find that this is an issue with your young one, encourage honesty, try not to put her on the spot and model trust by keeping your word.

Taking treats, turning on the TV, grabbing your iPhone- cute  toddler behaviors or a recipe for disaster?  Of course, for different families, the lines are different.  But if you find that your toddler is taking over and that you can’t regulate these types of things, it may be time to put your foot down.  Establish a few simple house rules and go over them often, so that your toddler really internalizes the rules.

If your child grows accustomed to interrupting you while you’re talking to someone, you’re potentially teaching her that it’s ok to be inconsiderate of others.  If you’re in the middle of a conversation, she should learn to occupy herself with something.bbif she keeps interrupting you, let her know that it’s not okay.  On the flip side, though, make sure that you’re spending enough time talking and playing with her so she doesn’t feel neglected.

Poingnat, touching and at times hilarious episode of The Longest Shortest Time.  Teaches a great lesson about kids who have sensory issues.

This one usually comes from older siblings.  Eye rolling, heaving sighing, a nasty tone of voice – none of this is pleasant to see in a toddler.  Not putting a stop to this may lead you to a grade school child with an attitude problem.  Just try to make her aware of the way she’s behaving and that it’s not acceptable.  If she persists, tell her that you don’t understand what she’s saying when she talks that way or that your ears don’t hear it and walk away, letting her know that you are there for her when she remembers how to speak nicely.

Some of these behaviors may just a phase that  your toddler will eventually grow out of.  No one knows your child better than you do, so keep an eye on her and take action when you think it’s appropriate.

Have you noticed any odd or troubling behaviors in your toddler?  Or in an older child who has grown out of them?  I’d love to keep the conversation going in the comments!