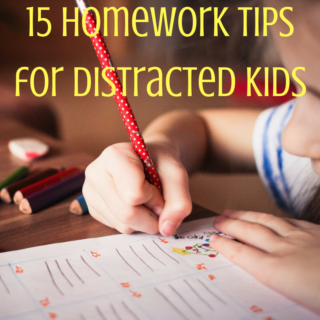 Kids share a mutual opinion about homework; they absolutely hate it! Their colossal imaginations constantly veer them away from the task at hand. Their thoughts seem to always be preoccupied with cartoon characters, video games, and other fun activities. Getting them to concentrate on their homework is daunting. But there are some tips that can help parents bring them back from their imaginative fantasies to the dull pages of their course books. Here are 15 homework tips for distracted kids to help them regain their mental focus. 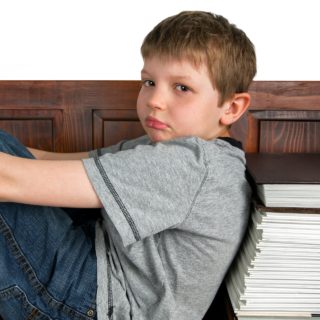 15 Tips to Get Kids to Do Their Homework

These 15 homework tips for distracted kids have a proven track record of revitalizing the mind of kids. How do you get your child to get his or her homework done? 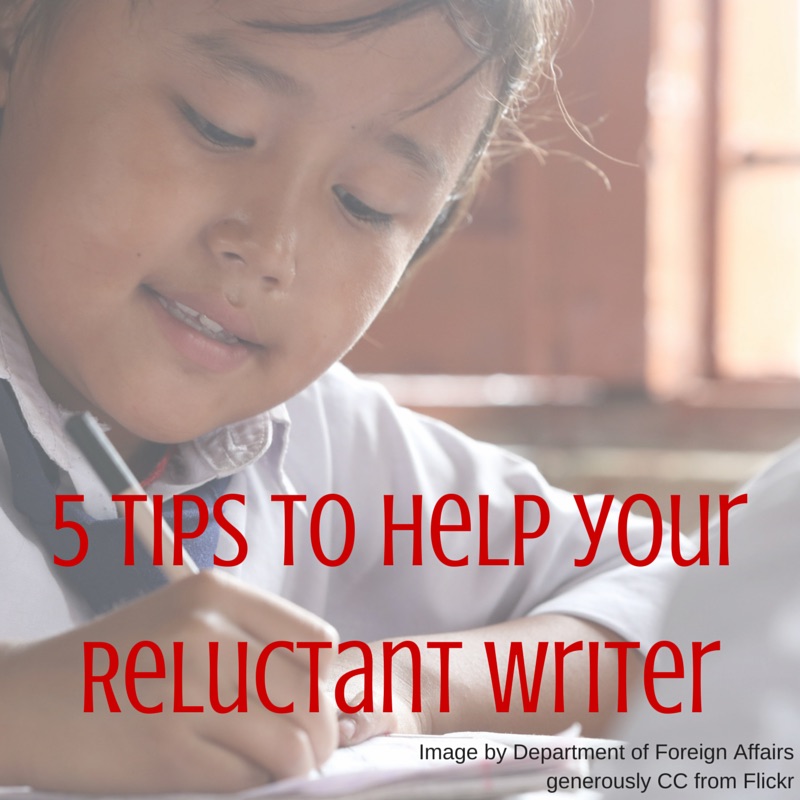 Before I dive in, I have to apologize for the sound quality of this podcast episode!  My regular microphone is “in the shop” and I’m trying to wait patiently.  I hope that you get value from these tips anyway!

Here are some of the links that were mentioned in the podcast, lots of paper for kids and other supplies:

And here is a simple chalkboard paint recipe!  It’ll be a great project to make with your kids.

I hope you enjoy these ideas for reluctant writers!  How are your kids with writing?  Do they like to write?  Can you understand their writing?

Does My Child  Have Dyslexia?

A diagnosis of dyslexia can potentially turn a child’s life around.  She may be struggling so much from being completely misunderstood.  Dyslexia has  nothing to do with being lazy, not smart or not motivated.  It’s is the most common learning disability in  the United States, so if you’re a parent wondering if your child  has dyslexia, you’re not alone.   And there are supplements that your dyslexic child should be taking.

When a child  has dyslexia, is mean that she has  a hard  time processing what she  sees  when she looks at or writes a word.  She may be having trouble connecting the sounds that each letter makes, how to pronounce words, or spelling and writing words.  Reading comprehension can be extremely difficult. This issue of the brain has no cure as of yet, but new research is coming to light about changes one can make in their diet to help treat this disorder.

Signs of Dyslexia in Children

The symptoms of dyslexia can range from mild to severe and can  vary  widely depending on the child.  Here are some symptoms to look for:

It may sound odd to read that your child’s dyslexia  may be related  to her diet, but like so many other learning disorders, there  is of course a link. There are  certain foods  that feed the brain, that can help fight dyslexia and squash the confusion.  Some children do have a genetic disposition to dyslexia but genetics don’t necessarily need to be a life sentence.  Here are five connections between food and dyslexia.

One piece of new evidence is coming to light from Oxford University, is how an imbalance of omega-3 and omega-6 fatty acids may help cause dyslexia. Their study gathered evidence from a group of dyslexic and non-dyslexic adults and measured the fatty acids in their body. The results were published in European Neuropsychopharmacology in January of 2007, showing that the people with the larger amounts of those necessary omega-3 fatty acids actually had a greater reading comprehension than those who had more omega-6. The average American diet is stuffed full of omega-6 acids, which causes the imbalance.

You can find omega-3 fatty acids in flax seed, cold water fish (tuna and salmon), and walnuts. Avoid some foods in omega-6 acids like different kinds of cooking oils such as, sunflower, corn oil, soybean, safflower, and canola. There is also a variety of different supplements you can take to improve your omega-3 intake.

Essential fatty acids are called such because they aren’t made by the body, so they are essential to the diet.  Visual function in dyslexia appears to have been improved by fatty acid supplementation, researchers say.  Visual problems and dyslexia seem to go hand in hand.

Children  with fatty acid deficiencies have also been shown to have a harder time reading, spelling and remembering things.

Other signs of fatty  acid deficiency include

There are a few reasons why our modern diets are severely lacking in EFAs, and omega 3s in particular.  The factory chickens are not allowed to roam outside and eat the bugs that are a part of its natural diet.  They are kept in cages and fed grains.  Similarly, beef cattle and dairy cows do not graze on grass and also eat grains.  The chicken and eggs we eat as well as the beef and dairy is highly lacking in these crucial nutrients and while leafy greens are also a source of omega 3, they are less adequate and don’t make up a large part of most people’s diets.

So, commit to only eating pastured chickens and their eggs and grass fed beef and dairy, or check out these supplements your dyslexic child should take.

There are a few factors to consider when choosing a supplemental EFA.

Purity – it should meet governmental standards and not contain contaminants.

Freshness – EPAs go rancid very quickly so make sure what you get is fresh.

Potency – make sure it has a  good amount of EPA and DHA.

Sustainability – get  a supplement that has been harvested in a sustainable way from a species that’s not under threat.

Here are a few brands that I have used or that I trust.

EFAs are known to be extremely save even in large doses and children often show signs of improvement after only a few months.

It was found by Dr. Ben Feingold, a pediatric allergy specialist, that different chemicals used in food actually causes behavior issues in children like hyperactivity. He researched for years and created a special diet to treat this problem, which was found to have helped children with other learning disabilities, including dyslexia. The diet entails removing ingredients such as coloring, artificial flavors, and preservatives like TBHQ, BHT, and BHA.

There are a lot of foods that naturally contain a chemical called salicylates. It’s a preservative and it’s typically harmless to ingest unless you have a sensitivity to it. Part of Dr. Feingold’s research has shown this particular chemical is linked to several learning and behavioral issues. As such, his diet plan removed salicyltes for a few weeks and slowly add those foods back to your normal eating regimen to help see which ones you may or may not have sensitivity to. It can be difficult to find which foods have salicyltes in them, as the issue is varied amongst different people, so you will have to test it and find out for yourself.

According to the Auckland Allergy Clinic in New Zealand, fruits and vegetables that are very high in salicylates include

Another experiment was conducted in Great Britain in 2004 after a student was placed on a gluten-free diet and his behavior changed drastically. They tested a larger group of students, removing the gluten from their diets. Six months after the diet changes in the students, their reading levels went from below average to progressing at a rate of improving a whole grade-level.

Gluten is a protein found in wheat, barley, spelt, rye and most oats. Going gluten free has grown in fashion of late and you probably know at least one person who doesn’t eat it.  It’s not just a fad though; most people have a good reason to avoid it.

Recent research suggests that not taking in enough Vitamin D is causing all sorts of illnesses, such as ADHD, Asperger’s, autism, and dyslexia. One thing all of these conditions have in common is a lack of Vitamin D in their systems, causing a child’s development to slow down. It’s important to regularly monitor your child’s intake of healthy fruits and vegetables while testing to see if their bodies are not absorbing enough of what they need for proper development.

Varying reports such as these are not enough to to completely call them a cure or treatment for dyslexia. But if your child struggles with this condition, it isn’t harmful to experiment with your diet to see if what she’s eating might be the cause. The more we study and research the foods and drinks we are putting into our bodies, the more we find how alarmed we should be. Chemicals, pesticides, genetically modified foods, etc, are all passed off as safe, healthy food, but they are nothing of the sort.

The best form of vitamin D comes from the sun.  Get your kid outside!

If you like somewhere without lots of sun or have found that supplements are needed (get her blood levels checked.. it’s an easy lab test), check out one of these:

Have you tried  any of the supplements or suggestions I’ve discussed above?  Have you seen any improvements in the cognitive function in your child? I’d love to hear about it in the comments!